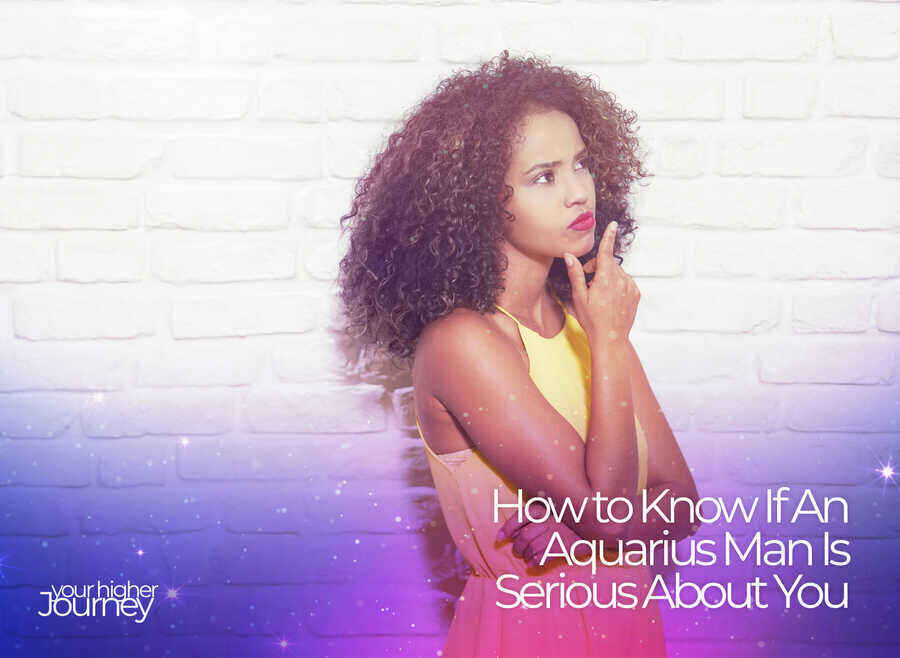 Represented by the symbol of the water bearer, Aquarius is a man of contradictions.

Despite being a social butterfly that enjoys connecting with people and sharing ideas, he is a loner who often takes off to be by himself. Solitude for Aquarius spells the time to reflect on their life, recharge, and best of all, the freedom to do their own thing.

As an air sign, the water bearer is big on freedom and hates being held to commitments, so he rarely makes any. It is why this sign mostly leans toward platonic relationships. For the Aquarius, man friendships take priority over romantic relationships.

Secretly though, Aquarians have a deep longing for love and will have no problem devoting themselves wholeheartedly when the right person comes along. Due to the fixed element of this sign, Aquarius man gives himself wholeheartedly when in love. Therefore, it is pretty easy to know when you are making headway with him.

You can tell the depth of this man’s love (i.e., if he is just starting to fall for you or is already madly in love) through his behavior. So, if you have been seeing an Aquarius man for a while and keep wondering whether he is serious about you, make sure to look out for the following signs. They are proof that you have undoubtedly won over the heart of your beloved Aquarius man, even if he has not told you as much.

1 His Attention Is All Yours 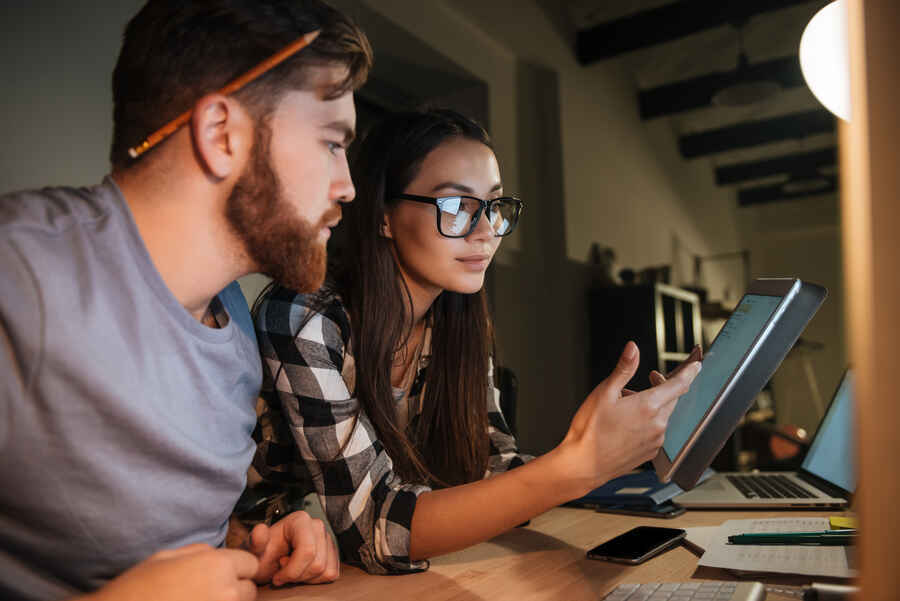 Aquarius is the kind of guy that will invite you to a party and then leave you all alone while he chats away with everyone. Although it might seem like it, this does not happen out of spite but simply because Aquarians are social beings.

Thanks to their charismatic, brainy, witty, funny, and quirky nature, Aquarians tend to become the center of attention in social settings effortlessly. They thrive in this kind of environment and will even flirt endlessly with potential partners.

But all of this changes when Aquarius finds a lady that he truly cares for and loves. It is a promising sign if you notice that you have been commanding all the attention of your Aquarius man lately while everyone else fades in the background. He is the type of person who shifts all his focus on the subject of his affection.

It is even better if he listens intently to what you have to say while out in public. It means that in addition to having eyes only for you, he also finds you fascinating, which is no small feat considering that this guy only sticks around a woman who manages to spark his intellectual curiosity.

2 He Has Grown More Comfortable

One of the surefire signs that an Aquarius man is serious about you is if he has become a completely different person. You see, dating an Aquarius man is a slow journey that begins with him acting cool and distant. As he starts falling for you, his whole demeanor changes to being a warmer, chattier, and more romantic person.

If your relationship is at a stage where he has completely dropped his guard and is acting more playful and goofy around you, it is because he feels very close to you. However, this does not come about lightly for Aquarius. So, you should feel secure in the relationship if it happens.

3 He Is Making An Effort With Your Family And Friends 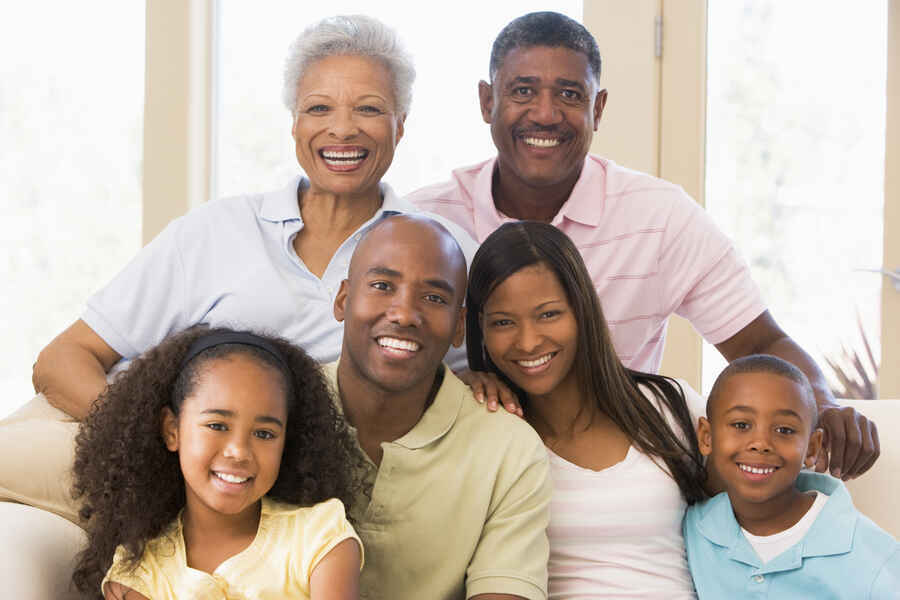 When in love, the Aquarius man will opt to bring his new favorite person into his inner fold. Often, this includes introducing her to his closest friends and family. It is a privilege only reserved for the girl whom he rates high in his heart.

An even bigger milestone for this sign is if he asks to meet your family and friends. And you can bet your life that he is not kidding around if he goes out of his way to forge a good relationship with them. It shows that he is serious about the relationship and would like it to go all the way.

Aquarius is an independent man who likes to pave his own path and do things in his weird, eccentric way. At times, natives of this sign even do things the hard or opposite way just to stand out from everyone else.

So, if he is not only asking for your take on things but also acting on your input, you should feel special. It is a clear sign that he values you enough to care about what you have to say.

Running vital decisions by you is one of the highest honors the water bearer of the zodiac can bestow to his lady. It is his way of showing you that you have a special place in his heart and not a mere pastime.

5 He Has Turned Into Your Rock 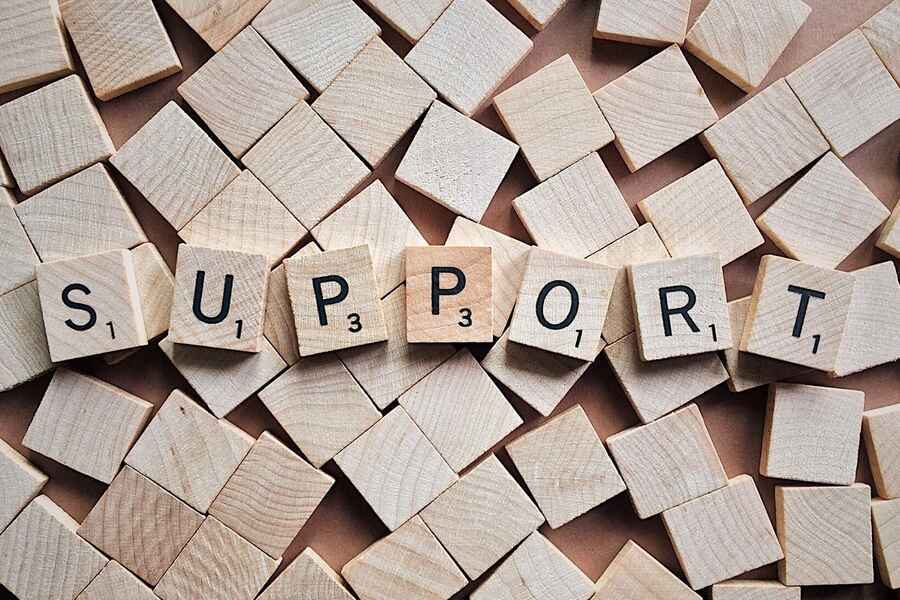 Aquarians can be quite unreliable in relationships, especially when things are just starting out. This sign values independence too much and is unwilling to give it away until totally sure about feelings for a love interest.

The Aquarian man does not know any other way to love than to prioritize his partner. Therefore, he will want you to see him as a dependable person.

In essence, his fixed nature will seep to the surface. Once this happens, he will start to spend more quality time with you, keep in touch regularly, and stick by you through thick and thin.

6 Talks About The Future

Aquarius is an eccentric sign and therefore takes a pretty unconventional approach to relationships. When having romantic feelings toward someone, the water bearer will not just come out and say it. Instead, he will make indirect comments that allude to where his heart is at or feeling.

For instance, discussions touching on his ambitions, future plans, or his long-term dreams for you as a couple are all significant indicators of how committed he is. It shows that he is deeply invested in the relationship and wants it to succeed.

7 He Has A Special Look In His Eyes 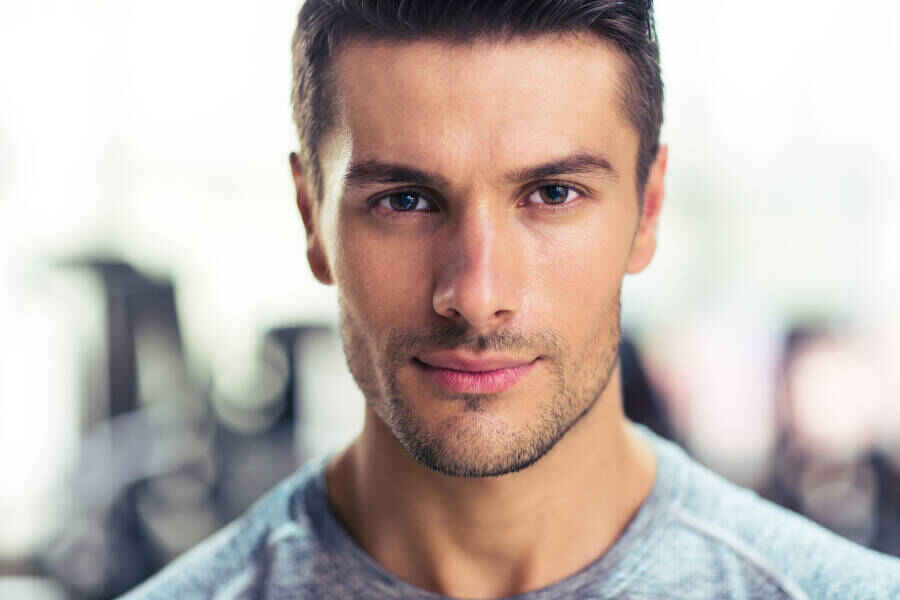 It is said that eyes are windows to the soul. Well, this saying rings especially true when it comes to the Aquarius man. Since this guy is not good at relaying his emotions, the most genuine reflection of his feelings will be in his eyes.

Aquarians have a knack for playing it cool even when they have an immediate affinity for someone. However, the male species of this sign cannot hide their feelings when overcome by love as it will show all over their face.

When madly in love, you will catch him looking longingly into your eyes whenever the two of you are together. It is not desire on his part, but rather a testament that he is crazy about you and may even regard you as his perfect match.

8 He Will Probe You

Aquarius is a naturally curious guy and, as such, will want to know everything about the woman stealing his heart.

He will start on a light note by asking your viewpoint on various topics to get a feel of the kind of person you are. Soon though, he will delve deeper and ask about your vision for the future, what nightmares keep you up at night, your wildest dreams, what makes you happy, and things like that.

If he is trying to get to know you better, he more than likely pictures himself with you in the future. He is just trying to figure out if the two of you are a good fit.

When it comes to relationships, the water bearer is a practical man. He relies on his mind more than his heart when dealing with matters of the heart. He will not hesitate to get into a serious relationship if he finds his partner to have a smart, loyal, adventurous, and forward-thinking personality.

9 No Topic Is Off-Limits 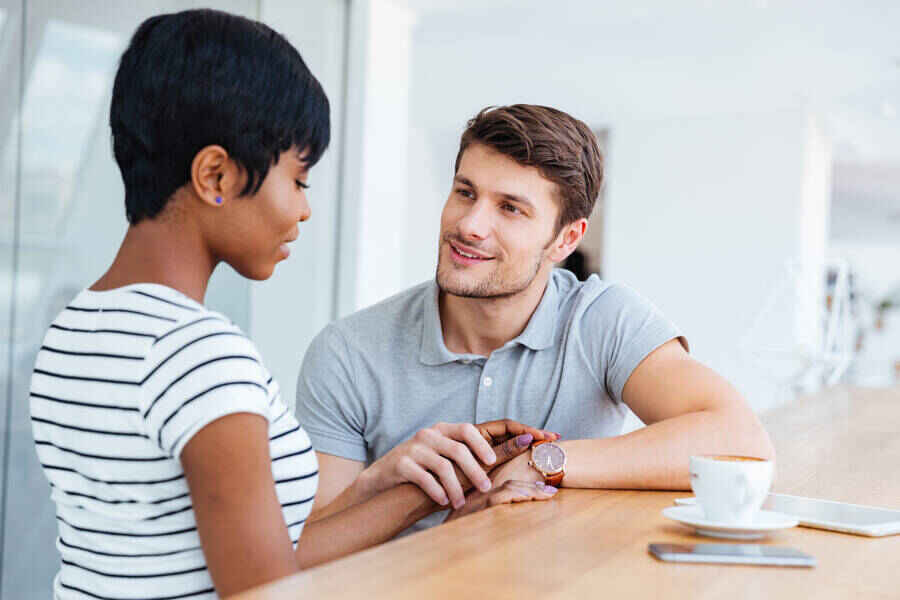 An Aquarius man who is deeply in love will also want you to know him better on a personal level. He will lay bare his entire life by sharing everything from the different sides of his personality to his secret fears. What’s more, he will make it abundantly clear that you are welcome to ask about anything, including uncomfortable topics like his past relationships.

Opening up is his way of establishing a deeper bond between the two of you. And he would not do that if you were not extremely important to him.

10 You Will Feel Cherished

Aquarians get a bad reputation for being aloof and emotionally detached. In reality, though, the male archetype born under this sign has a lot of emotions but does not wear them on his sleeves. Instead, Aquarians use their intellect to connect with the world as opposed to their feelings.

Those that this sign loves the most are the only ones who get a front-row seat to his sweet and compassionate side. So, what is the surest way to know if an Aquarius man is serious about you? Well, you will simply feel it.

If he is going all out to make you feel special, know that this man is all in and has your best interest at heart. Love awakens the chivalrous, romantic, and nurturing traits of an Aquarius. He will be more thoughtful, take extra care of you, and even surprise you with little gifts or grandiose gestures.

Ruled by Uranus, the planet of suddenness and disruptions, Aquarians are the wacky weirdos of the zodiac. They thrive on shock value, making it hard to read their minds or tell what they will do next. But one thing is for sure; their actions will always mirror their emotions when in love.

So while this sign is not one to shout his love from the rooftops, he will show you through the mentioned signs. The best advice is to be patient when dating an Aquarius sign. He will come to a commitment in his own time. And when he does, you can be sure that he will stand by you until the end.

Sun Trine Jupiter Synastry: Shared Harmonious Bond Previous post
Venus in 3rd House Synastry: Easy to Get Along With Each Other Next post