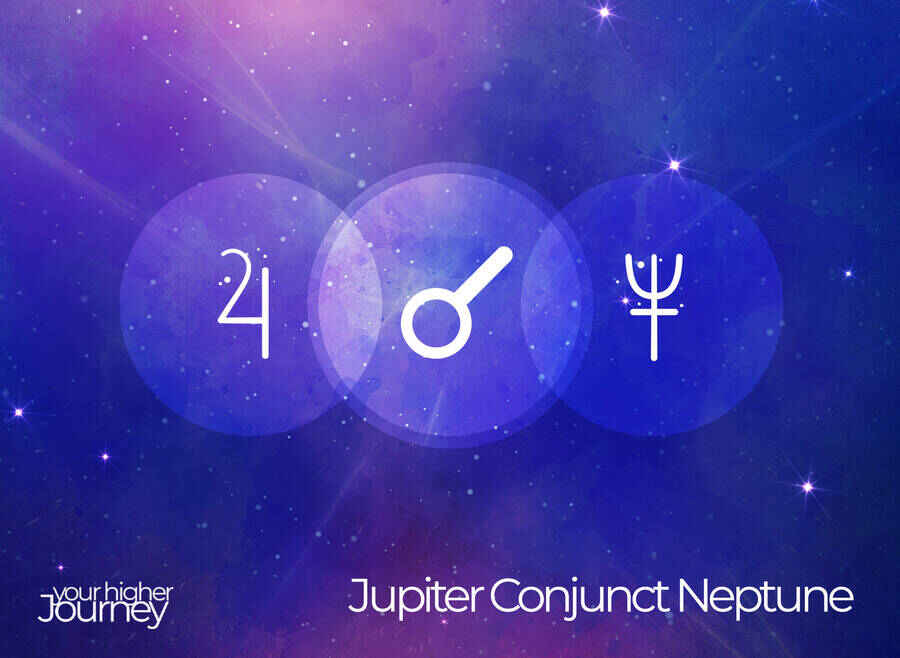 A Jupiter conjunct Neptune planetary combination can occur either in the natal chart, as a planetary transit event, or in synastry. Whatever the case may be, the aspect between these two celestial bodies creates a fusion of their astrological energies.

Jupiter is the planet of increase. Its energy prompts us to seek rewarding experiences on a physical, mental, or spiritual level.

On the other hand, Neptune dissolves limitations we impose on ourselves and reminds us of our boundless nature. When Jupiter and Neptune are in conjunction or appear in the same sign, this pairing can affect our perceptions, outlook, understanding, and spiritual beliefs.

The planets in this combination complement each other very well. They can have a positive impact on relationships and personalities, depending on the placement type.

However, some negative aspects may manifest as well. Read on to discover what the conjunction between Jupiter and Neptune means in different situations. 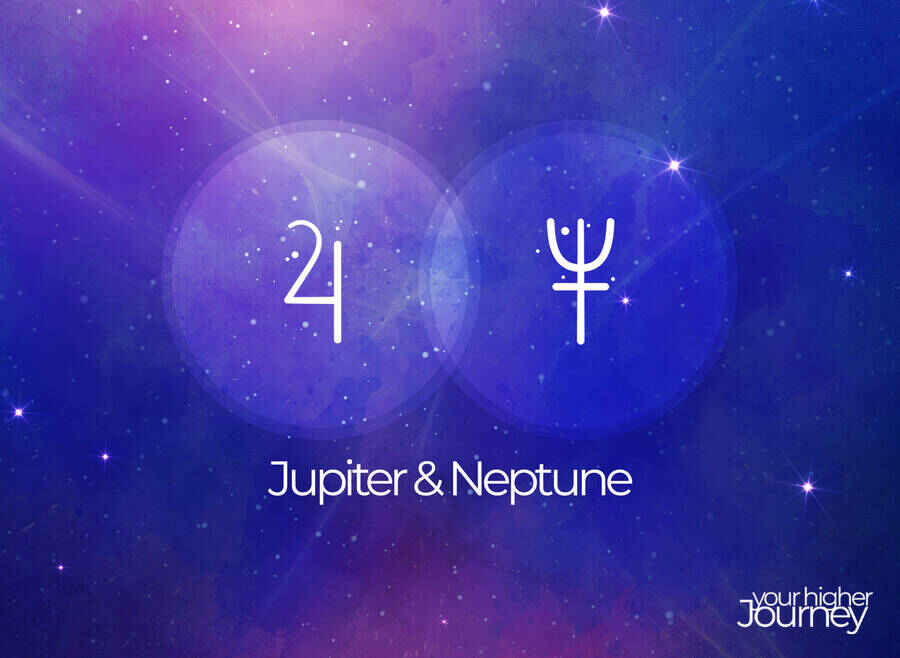 When astrological points of interest are in conjunction, it is essential to understand what they individually represent.

In this case, Jupiter is the first in line among the social planets of astrology. It represents good fortune, abundance, prosperity, expansion, and growth. Its interaction with other planets can reveal how we express our generosity and tolerance.

Jupiter is the ruler of Sagittarius, the ninth sign of the zodiac. It creates the urge for independence, expressed through a love for travel and exploration.

The energy of Jupiter also seeks insight through knowledge acquisition. It governs both mental and spiritual growth. That is why it is associated with religion and higher learning.

If you want to learn how lucky you are, life philosophy, or higher truths, then we have to study the energy of this planet. The negative influences of Jupiter could manifest as being overindulgent and or having blind optimism.

Neptune is the modern ruler of Pisces, the sensitive, imaginative, compassionate, intuitive, kindhearted, and giving archetype. In astrology, this planet symbolizes dreams, inspiration, illusions, confusion, and psychic receptivity. It awakens us spiritually to higher truths and provides something to look forward to in this mundane world.

People born during the Jupiter conjunct Neptune planetary alignment usually have an idealistic view of the world. It can affect their spiritual consciousness or belief system in different ways.

For instance, they could be willing and prepared to sacrifice themselves by showing great strength or courage to rid the world of injustices. Others may become too compassionate, making them too trusting in a naive kind of way.

Generally, when this planetary alignment appears in the birth chart, it can push a person to set very high expectations. The result of that is life may become unnecessarily complicated for these natives. They can become detached from the empirical world and start to ignore the practicality of everyday life.

Another effect of having Jupiter conjunct Neptune in the natal chart is valuing the things that we do not see in the physical world. Natives born with this planetary alignment can focus on the things that elevate their spirit or sense of being one with the universe.

Consequently, these individuals can become interested in religion, meditation, astrology, the occult, the paranormal, or mysticism. They often believe in a higher purpose, such as the afterlife or reincarnation.

In astrology, Jupiter is the great teacher. Combined with Neptune’s ability for creative self-expression, people born during a conjunction between these two planets can be very good at using abstract notions to convince others of their ideas.

However, the imagination of those who have this planetary combination can distort facts. If this conjunction happens to be afflicted in the natal chart, then these natives can lose touch with reality and end up living in their own utopian world. To avoid this, they can share their ideas with a trustworthy confidant who is pragmatic enough to ask the right questions that bring about clarity.

Jupiter goes through all the signs of the zodiac in about 12 years. When it is transiting Neptune, everyone feels its cosmic energy. For as long as a conjunction between these two planets exists, it can cause various trends in human behavior. 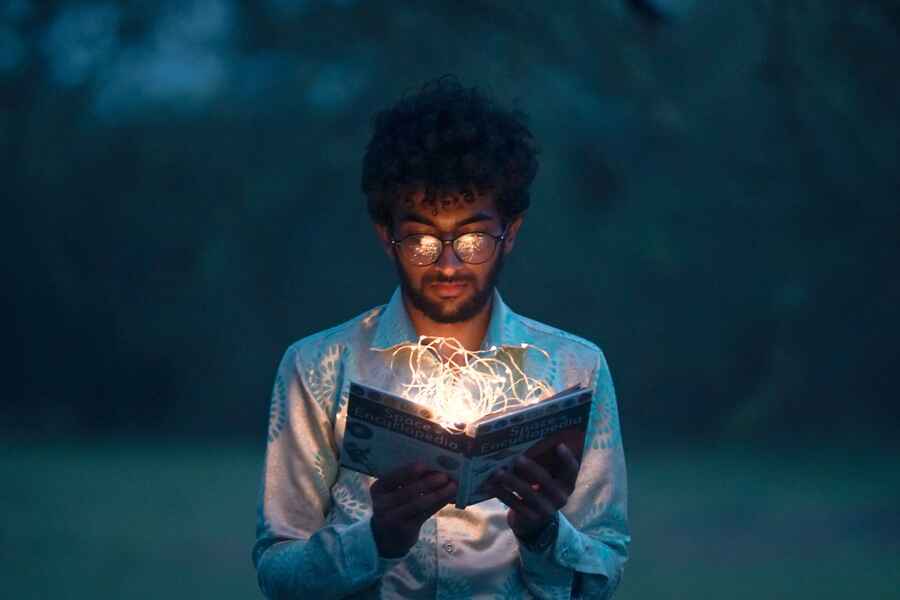 For starters, Jupiter conjunct Neptune transits can inspire a search for truth and knowledge. During this period, people are more in touch with their spirituality. For this reason, they open their minds to plenty of ideas and abstract theories to broaden their philosophical or religious views. This planetary transit may also be associated with a need to travel in search of new learning experiences.

The period in which Jupiter forms a conjunction with Neptune can also resonate with an omnipresent sense of idealism.

For instance, this can manifest as developing an altruistic or overly generous nature. There is an increased interest in dreams and inspired pursuits over pragmatic ventures. One can become tuned to feelings of believing anything is possible by simply being hopeful.

It may seem like a good time to tap into the energy of good fortune (brought on by Jupiter) inspired by a rich imagination (from Neptune). However, the reality is the Jupiter conjunct Neptune transit makes people prone to making bad business decisions. They will have unrealistic expectations because their perception remains clouded by lofty ideas.

During this period, taking practical consecrations into account does not get the seriousness it deserves. There could also be a desire to make personal sacrifices in pursuit of the greater good. Ultimately, the hunger for a more idealistic life can lead to being naive and taking people at their word, thus opening the floodgates for losses or disappointments. 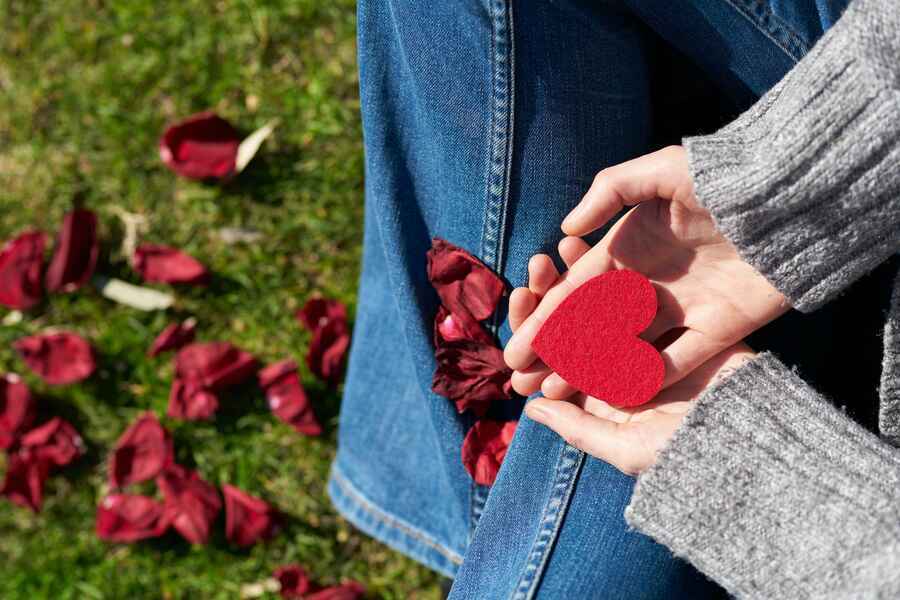 The Jupiter conjunct Neptune placement can also make natives of all signs more compassionate, charitable, and involved in humanitarian projects. During this time, feelings can become distorted, and reactions are exaggerated, especially if many emotions are involved. As such, people will tend to be sensitive and easily moved or touched.

Sometimes, pain and suffering in the world can become overwhelming and create the need for escapist tendencies. While this can be a healthy way to rejuvenate, the Jupiter conjunct Neptune aspect can influence many not to have limits.

Problems with alcohol and drug abuse can become pervasive as many people take their escapist tendencies and indulgences to the extreme while the transiting Jupiter conjuncts Neptune. Therefore, those who are too emotional during this cosmic event should keep themselves grounded.

When Jupiter happens to be in conjunction in one natal chart with the position of Neptune in another, it creates a special connection between two individuals. It can be in the form of shared dreams, ideals, or beliefs.

If a couple shares this synastry placement, they will need some feeling of romance, hope, idealism, or optimism in their relationship. When these aspects are lacking, their lives can feel a bit frustrating.

Partners with a Jupiter conjunct Neptune synastry tend to be in tune with each other’s compassionate natures. They can encourage one another to be more giving, optimistic, or idealistic in other ways.

Having this connection and faith in one another can be one way to be supportive in the relationship, but exercising some caution is necessary to avoid encouraging one another into unrealistic or impractical pursuits.

It is important to define common goals so that those who share the conjunct aspect between Jupiter and Neptune do not fall into the realm of unrealism and impracticality.

The Jupiter conjunct Neptune planetary alignment occurs approximately every 13 years. Its energy tends to create characteristics similar to the Pisces in temperament and a bit of Sagittarius.

Tendencies that will be evident due to Neptune include an inclination towards idealism, generosity, emotional sensitivity, spiritual awareness, and rich imagination. Jupiter’s impulse to grow can encourage people to go beyond what they are realistically capable of doing and be open to learning new things.

The biggest challenge of this planetary combination is not to lose touch with reality.