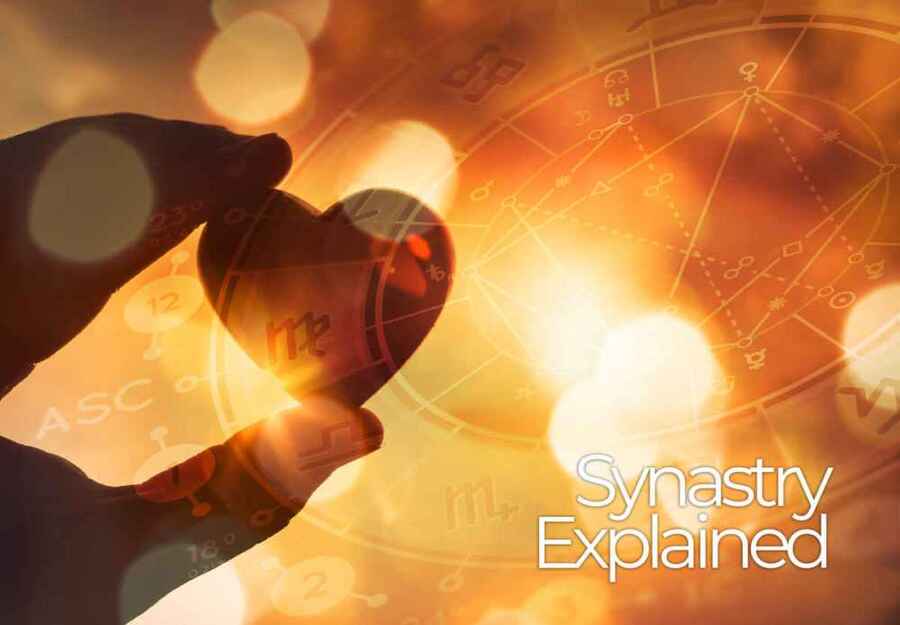 If you have recently developed an interest in astrology and want to learn more about how horoscopes affect relationships, then synastry is one topic that will pique your interest.

Many people who are new to this subject matter tend to focus only on comparing how individuals with different zodiac signs would get along with one another based on their personality traits.

For example, you may have been attracted to articles with topics that explore angles like whether Leos are compatible with Geminis, or compatibility between Libras and Scorpios, and so on. However, this only tells us about the influences of star/sun signs, and that barely scratches the surface when it comes to the potential of relationships from an astrological standpoint.

Synastry, otherwise known as relationship astrology, takes on a more holistic approach. It involves comparing all the cosmic forces in the birth charts of two individuals or more, which brings to the fore areas of strength and weakness.

The information we get from synastry can promote positive interactions as well as minimize misunderstandings or conflicts. Although it is a technique used often to assess compatibility between couples who are involved romantically, synastry can also prove useful for other types of relationships. That includes relations between parent and child, friends, or even professional colleagues.

In this revealing guide, you will find a complete introduction to synastry with simple explanations. Read on for more insights into relationship astrology.

This Post At a Glance show
1 What Is The Natal Chart In Astrology?
2 How Does Synastry Work?
3 How Do Planets And Luminaries Affect Synastry?
4 What Are Aspects In Synastry?
4.1 1 Conjunction
4.2 2 Sextile
4.3 3 Square
4.4 4 Trine
4.5 5 Opposition
5 Birth Chart Houses & Synastry: What Is The Relationship?
6 Synastry: A Brief Summary

What Is The Natal Chart In Astrology?

To get a better understanding of synastry, first of all, you need to know what the birth chart is in astrology. It is a diagram showing where the sun, moon, and all the planets were at the time of birth. Think of it as a map of the heavens the moment you took your first breath.

Everyone has a natal chart comprising of two luminaries (the sun & moon), a rising star (also known as Ascendant), plus eight planets, namely Mercury, Venus, Mars, Jupiter, Saturn, Uranus, Neptune, and Pluto. The position of these celestial bodies is also unique to each individual.

Even though you might be a Taurus or Sagittarius native, your other planetary forces likely reside at different signs of the zodiac as well.

When you interact with other people, the energies of their birth charts react to yours. The resulting interplay can be harmonious, neutral, or incompatible, and this explains why people with different personalities relate to each other differently.

How Does Synastry Work?

Synastry compares the relative positions of the planets and other celestial bodies on your birth chart against that of another person. For instance, we can use this technique to assess what it would mean to have your moon sign in the same or different horoscope as the Ascendant of someone you are dating.

How Do Planets And Luminaries Affect Synastry? 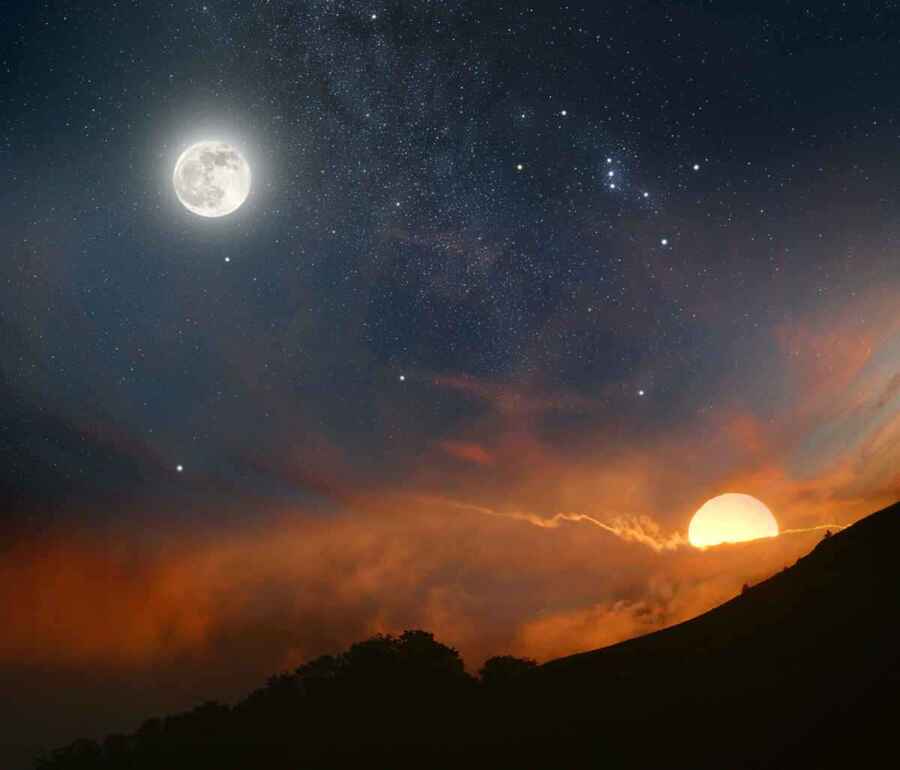 Synastry interactions can create harmony or disharmony, depending on the celestial bodies involved. That is because the planets and luminaries rule a particular area of life.

When it comes to love and relationships, the luminaries and some planets get more attention because of what they symbolize. For instance, Venus and Mars are the most significant planets in relationships. They both rule love and sexual chemistry, respectively, which are two factors that can determine what type of partner you would find attractive.

Mercury is pretty significant as well because it governs communication, a key component in any relationship.

The moon’s importance in synastry has to do with the fact that it controls emotions. However, its influence only becomes apparent after you get to know someone.

In contrast, the sun sign, which shapes your core personality, and the rising star or Ascendant, expressed as your demeanor, tend to affect first impressions. Therefore, horoscope traits associated with these two planetary forces play a significant role in synastry. They are what people will immediately notice when they first meet you.

What Are Aspects In Synastry?

In astrology, the zodiac consists of twelve signs. Each one spans an area of about 30 degrees.

On the birth chart, the sun, the moon, rising star, and other planetary forces can be closer or further apart from each other. The angular distance between different points of astrological significance is what we call aspect.

These measurements can help to make predictions about whether a particular relationship is compatible or not, depending on the celestial bodies being taken into consideration. There are five synastry aspects used to make such determinations, as explained below.

When two planets are conjunct or in conjunction with each other or any luminary (usually within six to ten degrees apart), that means they are in the same zodiac sign.

This aspect brings two planetary forces together and amplifies the corresponding energies. It can produce one of the most intense synastry interactions, depending on the planets involved.

However, it can be hard to get along when there are too many conjunctions in the birth chart because such people end up being too similar instead of complementing each other.

These are planets which at least within an orb of 60 degrees or two zodiac signs apart. As a result, the sextile aspect creates a harmonious pair of planetary energy from celestial bodies positioned across two different zodiac signs. It can influence a lasting bond between two people with traits that balance each other.

When two planets on the birth chart align at a 90-degree angle or perpendicularly, they form a square aspect. The resulting interaction can be compelling and exciting, but too many square planets between two birth charts create stress and tension.

In most cases, planets in synastry with a square aspect urge both partners to dominate each other. More often than not, this tends to amplify the negative qualities of each person.

When you come across the trine aspect, it means that the planets involved are 150 degrees from each other or five zodiac signs apart. It is one of the most positive planetary correlations in synastry.

Just like the sextile aspect, trine creates harmonious blending and compatibility. However, there can be the risk of repetition or boredom because the planetary energies involved blend so seamlessly that the relationship can lack excitement or passion.

Opposition planets are six zodiac signs away from each other on the birth chart. In other words, they are 180-degrees apart. The resulting formation is akin to looking at the reverse image on a mirror.

As such, planets in opposition generate a strong magnetic attraction. At the same time, opposition aspects pose a challenging interaction. The planetary energies can create an intense, powerful, and sometimes destabilizing effect.

Birth Chart Houses & Synastry: What Is The Relationship?

On the birth chart, there are also a dozen houses, denoted by the twelve zodiac signs. They all represent an integral part of human existence, from health to money to relationships.

In synastry, the relative position of planets in the 1st, 5th, 7th, and 8th houses are the most important because they reveal intimate details between two birth charts.

Synastry is a technique in astrology that provides a wealth of information regarding whether two people can get along or have a thriving relationship based on the energies of aspects between their birth charts.

However, it merely points out areas of strength and weakness, and cannot predict whether a relationship will succeed or fail. That is down to the individuals involved.

When you see incompatibilities between synastry aspects in your natal chart and that of a loved one, that doesn’t necessarily mean that things cannot work out. Even the most idyllic matches tend to show some signs of possible discord.

On the plus side, knowing potential problem areas is a good thing because it provides an opportunity to fix them.

311 Angel Number: Surge Ahead with Optimism Previous post
Planets in the Houses Explained: A Revealing Astrology Guide Next post