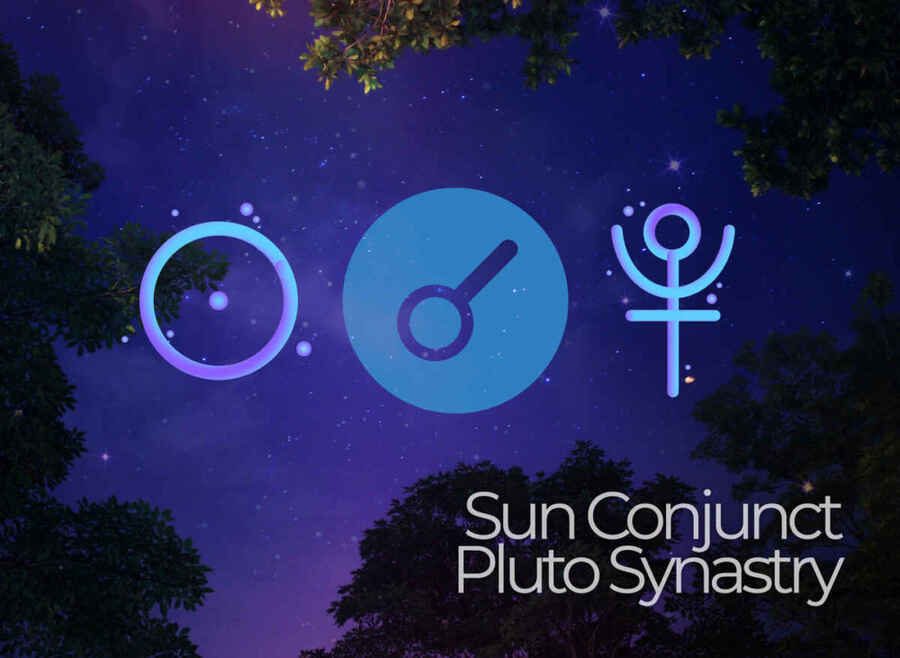 When your Sun conjuncts with your partner’s Pluto in the synastry chart, this union is grand and real. It is a relationship free of artificiality, and the Sun and the Pluto act like a moth to a flame. Find out everything about the influence of the conjunction of both these luminaries has in love synastry in this complete guide to Sun Conjunct Pluto Synastry.

When two different planets occur in the same house. In conjunction, they are zero degree apart from each other, and their blended energies define your life.

This hyper-focused aspect in relationship synastry can be beneficial or malefic simultaneously depending upon the involved planets’ attributes and vitalities.

If both planets’ energies match, the conjunction brings excellent results, whereas the mismatched characteristics can create a challenging vibe that amplifies disagreements. 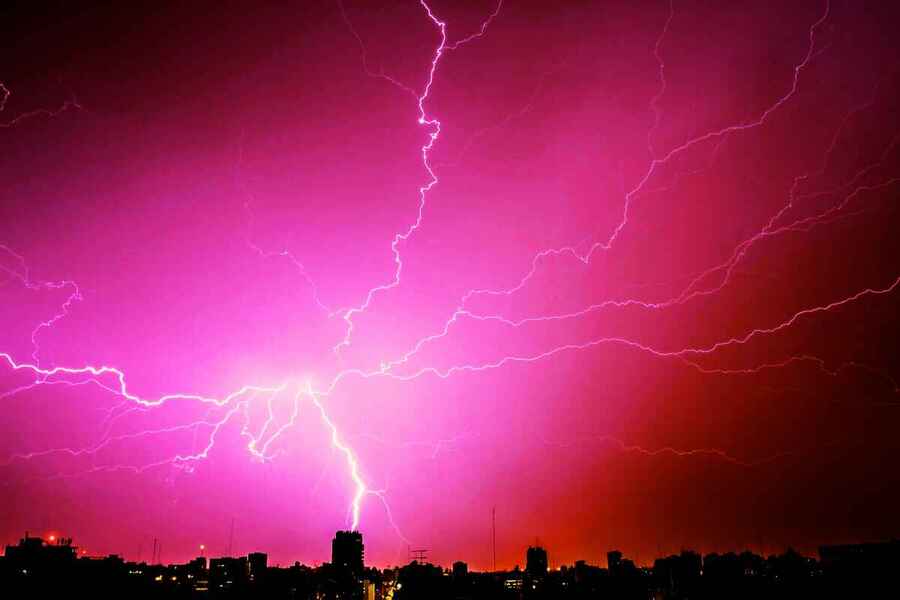 The pairing of Sun and Pluto is powerful in love synastry. Their relationship is fascinating, intriguing, and mesmerizing. Their intense bond influences every area of the involved persons’ lives.

The Sun finds attraction in Pluto’s mesmerizing personality and tries not to miss a chance to lure in the emotionally composed Pluto person. The Sun persons are innovative, determined, and strong-willed personalities who know how to rule others’ hearts.

On the other hand, the ineffable Pluto persons have the potential to transform others. The dominant traits of their character compel them to hold their supremacy over their partner.

The Pluto has an inherent desire to keep an upper hand in everything, even in their love bond. The Sun person feels enthralled with Pluto’s dominance. Sun’s obsession intrigues Pluto’s jealousy and possessiveness to keep their partner focused solely on them.

Both want to know the ins and outs of each other, leaving nothing hidden or unsaid between them. Their companionship is marked by profound love and powerful sexual attraction.

The union of Sun and Pluto certainly helps both partners undergo mutual growth, but the Sun person has to accept Pluto’s temptation to keep his/her partner dependent.

The Pluto person tries to keep the Sun person under control to reign his/her expressive, independent, and proactive approach towards everything. Owing to their mutual attraction for each other, both have a window to each other’s soul to understand their strengths and vulnerabilities.

A Deep And Hard To Define Relationship

The nature of a relationship formed under the Sun and Pluto conjunction is deep and hard to define because of the heated arguments and explosive moments.

Both partners often feel off-balance and distant from each other because of the constant threat of losing the magic of love in their relationship. Because they know each other’s secrets and dark traits, that also becomes a reason for their disagreements.

Pluto is obsessive, and a control freak, which often makes the Sun person feel imprisoned in his/her company. Pluto’s compulsive personality becomes intolerable and exhausting for Sun in the longer run.

Undoubtedly, their connection is strong and significant, but the grey shades of both planets and, especially Pluto, can make it tense and challenging. 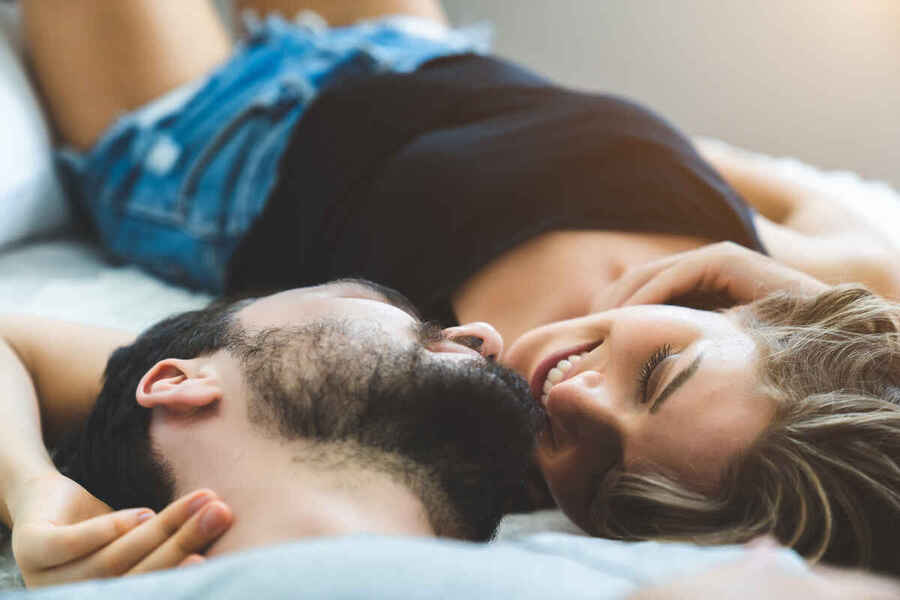 The pair of Sun and Pluto in conjunction indicates karmic lovers with the most intense and significant bond. Both are destined to lose each other in their arms. Pluto craves physical intimacy with his/her ideal mate.

The inexpressive Pluto becomes an indicator of stimulating the Sun’s desires for love, romance, and sex. Their relationship is beyond cognitive domains. Both connect at physical levels first and then embark on the adventurous ride of exploring the new horizons together while catering to each other’s demands for intimacy.

Their bond is subtle, and both know that they dream about each other. Although Pluto’s jealousy flows in to their relationship the physical attraction between them curbs that and allows them to experience the relationship of a lifetime.

They are co-dependent on each other. The Sun person knows what their Pluto companion finds attractive and beautiful. They style themselves to please the Pluto person and lure them towards the Sun.

Similarly, Pluto is aware of the Sun’s needs and adores him/her to enjoy the depths of their physical relationship. Pluto is the master of sex and romance. The sexual attraction between the Sun and Pluto is primal and instinctive.

The Pluto person’s touch and advances excite the Sun person, and they fuse their attraction and passion for each other into sexual intimacy for satisfying each other. Pluto’s darkness and Sun’s light form an intense sexual bond that is hard to get over for both partners.

The Sun person is naturally a freedom-lover, and he/she possesses an excellent ability to get along with people outside their close connections. This easy to mingle trait threatens Pluto person to lose his/her dominance over them.

Remember, Pluto wants to be the ruler in their companionship. He/she intends to take charge of every decision and does not shy away from manipulating the situations into their favor because Pluto is a possessive lover.

The Sun symbolizes conscience and life direction, whereas Pluto symbolizes death, rebirth, and transformation. Pluto’s desire for upholding his/her authority in their relationship implies that Pluto wants to alter Sun persons as per his/her likes and dislikes.

This selfish quest creates rifts in their relationship. It seems as if the Pluto person tries to control the Sun’s moves and wants to steer their life completely. This sometimes infuriates the Sun person as no one likes to be dictated to all of the time, no matter how much both parties are head over heels in love with each other.

Owing to their love for Pluto, the Sun persons tries to harmonize their relationship, but the constant dictatorship can lead their love to spiral into a bottomless pit. However, this unique pair of dark and light possesses the ability to overshadow the grey areas of their romantic association with deep feelings for one another.

Sun brings out Pluto’s hidden sexual desires to the surface. Their relationship is intense and light simultaneously. Pluto feels as if before meeting the Sun person, no one has ever understood them in the way Sun understands them.

Sun feels drawn to Pluto’s mysterious energy and intense feelings. They both ache for each other. The conjunction creates a passionate connection between them. They want to rule each other.

Their relationship is filled with intense emotions. It is a relationship based on a love-hate association. The power struggle between them might create problems for them, but these karmic lovers are ready to go to the ends of the earth for each other.

However, to make this relationship work, Pluto needs to suppress its desire to control every aspect of Sun’s life, whereas Sun needs to understand the sensitive nature of Pluto and try to stay away from things that make their partner uncomfortable.

Sun and Pluto are the extremes of the synastry chart. Their bond is a journey of transforming their personalities to fill the void of their unique connection because the attraction they feel for each other is something they have never felt before.

Moon in the 7th House Synastry – An Atmosphere of Acceptance, Security, and Open-Mindedness Previous post
311 Angel Number: Surge Ahead with Optimism Next post