Sun Trine Pluto Synastry – A Union of Opposite Personalities 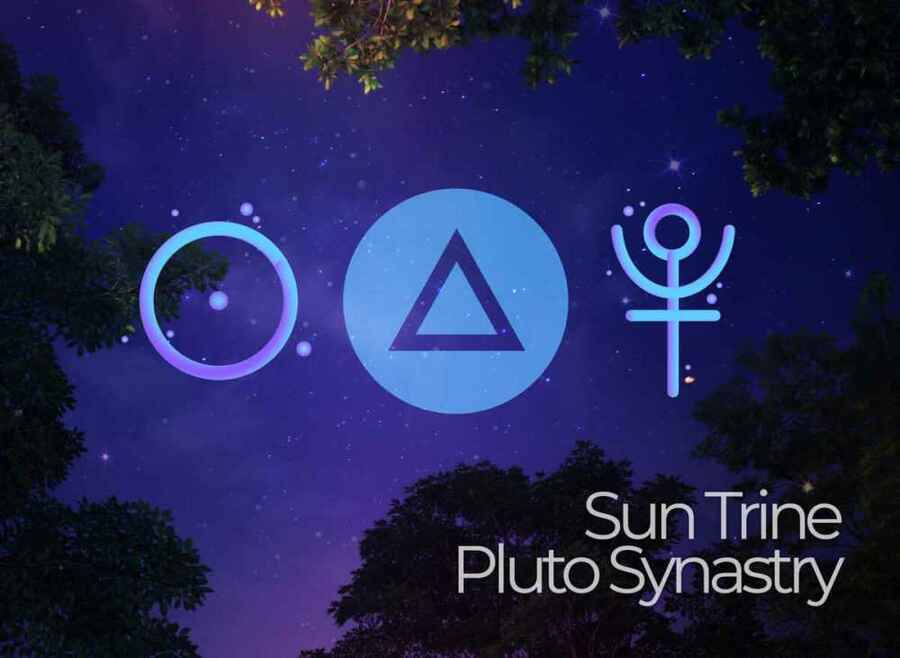 Since the dawn of humanity, humans have looked towards the stars to uncover the unknown. The thirst for knowledge helped humans discover the planets’ ability to shape and influence our personalities and characteristics.

While most of us are only aware of our Sun sign, astrology runs much deeper than that. The planets’ various aspects reveal deep secrets about our nature, interests, and the choices we make in life. One of the most influential aspects in astrology is known as Synastry.

Reflecting opposite energies, the union of Sun and Pluto is like the combination of light and darkness. While Sun comes from light and holds its heart on its sleeves, Pluto likes to keep its emotions hidden.

Continue reading to explore how Synastry influences the relationship between Sun and Pluto.

The reality of any relationship in astrology can be determined by comparing the planets in two individuals’ natal charts. When the planets form a harmonious union, it gives birth to a stable and loving relationship.

On the other hand, with mismatched planets’ alignment, the relationship tends to have a rocky road ahead. While relationships always require work, when the stars are against you, it becomes even harder to reach your destination.

However, despite challenges, true lovers always find a way towards each other in the end. You need to trust your instincts and keep trying if you think your significant other is the one for you.

When planets are 120 degrees apart, it gives birth to the Trine. Known as the most promising aspect, Trine brings with it the potential for a positive change.

Trines have the power to generate sexual magnetism between two individuals. While it boosts your sex appeal, it helps you feel safe in the arms of your lover, giving you the freedom you need to be true to yourself.

This raw sexuality generated by Trines gives natives the ability to form a strong emotional bond that helps them connect on a deeper level. It brings authenticity and flexibility to a relationship that allows partners to grow and learn from each other.

In Sun Trine Pluto Synastry, both individuals work to stabilize each other, which helps them find a newfound respect for their relationship and each other.

Sun And Its Hidden Traits

In astrology, the Sun represents life, energy, and willpower. The Sun’s symbol in the natal chart determines your personality, ego, and rationality. Individuals with a powerful sun placement possess the gifts of confidence, will, and determination.

Those who carry the attributes of Sun are creative, proactive, and fun-loving. However, the Sun’s strong impact can sometimes turn these natives into self-absorbed individuals who fail to think about others.

The Sun defines us and our capabilities. It gives us the direction to accomplish our goals while governing traits such as motivation, courage, and devotion. If the Sun is too strong in a native, the person can exhibit selfishness that can lead him down the wrong path.

Pluto And Its Hidden Traits

Known as the generational planet, Pluto has characteristic darkness in astrology. Pluto was recognized as the God of the underworld due to its dark mystical energy in ancient times.

Associated with death, rebirth, and regeneration, Pluto has the potential to transform one’s personality. Individuals with Pluto in their natal chart carry a destructive force within that can damage relationships beyond repair.

However, individuals who hone the power of Pluto possess the ability to sense others’ thoughts and feelings. With a strong sense of intuition, such individuals have the talent to pick queues and understand the storm within someone’s mind.

While Pluto’s influence can be dramatic, its positive energy allows people to separate truth from fiction.

The Sun is often intrigued by Pluto’s mystery, while Pluto knows how to keep its distance to avoid falling madly in love. Their relationship is known for its passion, energy, and intensity.

When both these signs connect through a trine, they learn to share their feelings with each other. Such a union has the potential to form the most remarkable love story.

However, their relationship is not always rainbows and roses. When Pluto becomes obsessive and dominant in the relationship, its dark side can ruin happiness for both of them.

While Sun is known for its positive energy, it can sometimes dive too deep into the world of fantasy. Pluto’s pull to the world of reality can come as a shock for Sun, which can cause complications in the relationship.

Regardless if they end up being together for eternity or part ways midway, these natives always carry a sense of respect and love for each other. The connection formed by the Trine helps these individuals discover new parts of themselves and go on unexpected journeys together.

When Sun and Pluto combine under the Trine, their relationship has the potential to rejuvenate their spirits and transform them into their better selves.

Both individuals in this relationship become fascinated with each other’s quirks and habits, making this union blessed.

However, as in every relationship, both these natives need to overcome challenges within themselves to experience a happy relationship. Pluto’s dark side may urge it to take charge, while Sun’s unrealistic expectations have the potential of breaking Pluto’s heart.

This thirst for control and perfection can ruin their relationship forever. While it may take some time to understand each other, once these natives fall in love, there is no turning back.

However, it is vital to control the urges that can harm or hurt your partner. When these two individuals finally understand the art of keeping each other satisfied, the relationship can blossom into something truly magical.