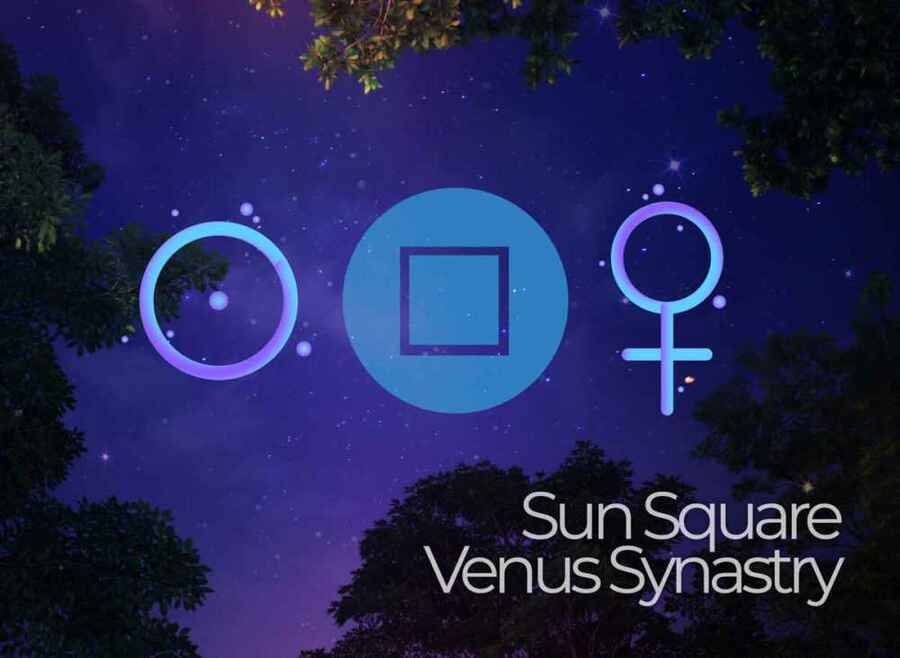 A union of gentle lovers, Sun Square Venus Synastry, creates a strong bond between two individuals. It compels them to feel affection, attraction, and respect for each other.

Sun and Venus, in a relationship, complement each other’s qualities. The presence of Venus makes the Sun feel more special and loved. Similarly, Venus feels intrigued when the Sun person enters his life.

Acceptance and tolerance characterize this relationship. Both parties accept each other’s flaws without any hesitation. However, while this partnership is fulfilling at the surface, it is sometimes not enough to satisfy your deepest desires.

Continue reading to discover more about the dynamics of Sun Square Venus Synastry.

This Post At a Glance show
1 What Is Synastry?
2 Square – Aspect Of Sharp Corners And Challenging Paths
3 Sun – The Symbol Of Life And Identity
4 Venus – The Planet Of Love
5 Sun Square Venus Synastry – Romance & Compatibility
6 Bottom Line
6.1 Find Out More About Synastry and Relationship Astrology

For hundreds of years, astrologers have predicted compatibility between two individuals by studying their planets’ alignment. Every individual on this planet has a unique birth chart. This chart maps everything from their first breath to their last. Synastry is the study of the interaction between two people’s planets.

While most people are only familiar with their Sun sign, Synastry plays a significant role in understanding one’s deep personality traits that either make or break a relationship.

When both individuals’ planets are in sync, it creates a powerful synergy that makes a relationship strong and loving. However, when the stars are not in your favor, a relationship can become overwhelming and weak.

Square is one of the most challenging aspects of astrology. With its four 90 degree angles, it can cause drama between the involved planets.

Squares are known to produce tense energies between two planets. If a square joins the Sun and Venus, the relationship may have a rocky road ahead. The square aspect can create stressful situations that can overwhelm a couple.

However, despite their reputation, squares are not a bad thing. They only call for more effort and work to make the relationship fruitful and loving. If your relationship comes across any hardship, this aspect only asks you to put in the energy and time needed to reach a compromise.

Once you get through the initial phase of hardship, the Square aspect helps a relationship become more loving.

Sun – The Symbol Of Life And Identity

In astrology, the Sun represents playfulness, freedom, creativity, and generosity. While Sun is usually associated with one’s outer personality, it also guides our goals and ambitions in life. The Sun allows us to explore our future while being mindful of our past.

In a relationship, the Sun acts as a mature partner who understands the need of its lover. It acts as an inner child that wants to explore new places, meet new people, and form new associations. When Sun and Venus come together, their mutual energies give birth to a relationship filled with love and compassion.

The Sun also tends to be the one who likes to take risks in a relationship. Because of its courage, such natives strive to seek new adventures wherever they go. While these individuals are confident and independent, their partner’s negligence can bring out their selfish side.

Venus – The Planet Of Love

Known as the most auspicious planet, Venus is the planet of romance and sensuality. With its dual rulership of Taurus and Libra, Venus is associated with two aspects of life, money and love.

Venus is the ruler of your sentiments and what you value most in your life. Through Venus, an individual learns about the things that excite him and make him happy.

The role of Venus varies significantly in the charts of the two genders. In the chart of a man, Venus tends to leave its love aspect aside to concentrate more on life’s financial matters. However, in a woman’s chart, Venus is overcharged with romantic energies and fantasies.

In a relationship, Venus looks for a companion that will respect and love it more than anyone else in the world. A Venus looks for stability, romance, and respect in its partner. When Sun and Venus come together, Sun’s spontaneity may make Venus hesitant about their future together.

A couple with Sun Square Venus Synastry feel a powerful attraction to each other. This relationship is known as one of the warmest combinations, where both partners respect each other’s space.

However, sometimes, such a relationship becomes a comfortable spot to hide in instead of a loving home where you want to spend the rest of your life. Therefore, before going all-in with your partner, it is vital to know that you are madly in love and not making a compromise for the rest of your life.

The combination of the love goddess with the light, on the surface, is a match made in heaven. Both cosmic bodies complement each other and bring out the best in the other. However, when accompanied by the square aspect, this relationship tends to become challenging and exhausting.

When you feel like you don’t really understand your partner as you should, things might take a turn for the worst. However, know that every relationship requires commitment and sacrifice.

When you put in your best efforts and leave the rest to the divine forces, you will be guided towards a path best suited for you.

Every relationship requires effort and sacrifice from both partners. However, in the end, it comes down to the love and respect you have for each other.

When two companions love each other despite their negative traits, their relationship grows stronger. Venus and Sun carry their own quirks and personalities, but when they come together in the form of a romantic union, nothing can come between their happiness.

The stars are a way to guide us towards our soulmate. However, when you find the person with whom you can spend the rest of your life, trust that the universe will help you achieve your destiny.

Angel Number 8: Abundance Will Come in Your Life Previous post
Sun Trine Pluto Synastry – A Union of Opposite Personalities Next post