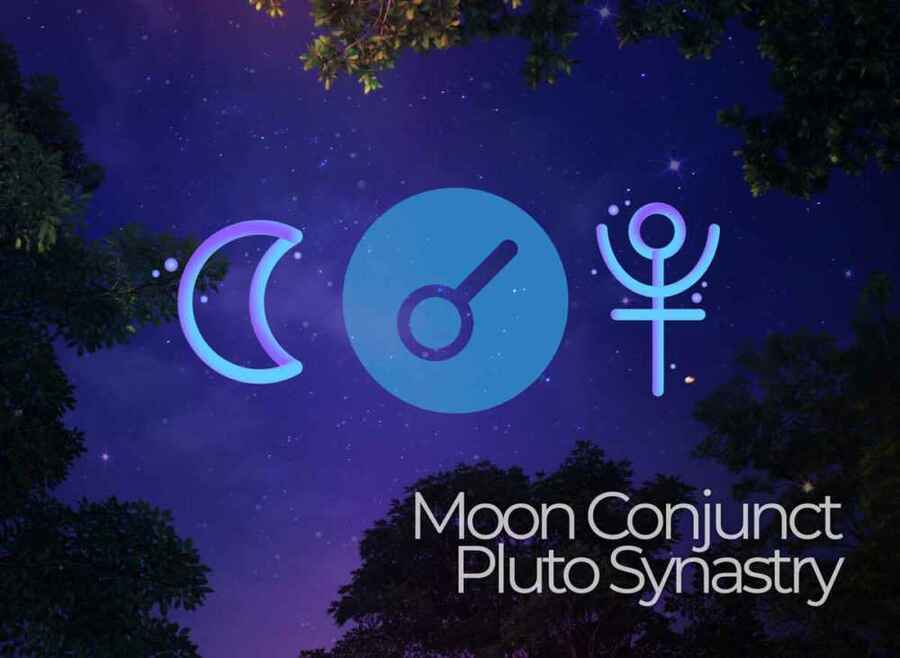 The curious human always seeks answers to their questions regarding their lives and relationships from Astrology that science can’t always answer.

Although since ancient times, science has provided consistent and reliable answers, it has never hampered people’s interest in astrology and astronomy.

Individuals seek astrologers’ help to interpret their natal charts based on the planets’ configuration at the time of their birth. The planetary movement within the natal chart reveals the character, relationships, and temperament of an individual.

It provides a detailed insight into anyone’s personality. The specific angles of planets within the birth chart implies astrological aspects that influence human characteristics.

In this guide we’ll uncover how Moon conjunct Pluto Synastry molds your life.

The conjunction is an ambivalent, heavy, and 0-degree aspect where the energies of involved planets conjoin. This unique and tricky aspect often confuses astrologers because of its good and bad implications.

It gives them a direction, freedom of choice, and a great sense of importance wherever they go.

Moon is a luminary planet that has always attracted people because of its mystical and magical charm. Although it reflects the light of the sun, it is recognized for illuminating paths.

In astrology, the Moon symbolizes our inner needs and sentiments. It guides us to realms of dreams and imagination. Everyone has always admired this startling representation of feminine principles, elegant beauty, mystery, and inspiration.

The Moon represents man’s comfortable and cozy homes, intimate relationships, safety, and protection. It speaks about your emotional nature and indicates how you will handle and reciprocate others’ feelings in tough situations.

Pluto is the planet of transformation, rebirth, evolution, and strength. It evokes you to channelize your inherent energy to achieve your plans, goals and dreams.

Astrology also associates Pluto with destruction. It is the planet of aggressive and dangerous people. It symbolizes an individual’s intimacy, obsession, and possession.

Carrying Pluto’s energies, you possess the potential to make new things or break things apart. Pluto is an outlet of intense powers of creation and destruction. Among other planets, the dwarf Pluto is the ruler of taboos, psychic receptiveness, and uncertainty.

It represents an individual who can bring healing transformation, as well as someone who succumbs to the urge of obsession to destroy everything with his bloodthirsty temperament.

This aspect in synastry is about the revelation of emotional and overly sensitive people.

Their connection at the mental level gives birth to a deep relationship that eventually results in a strong sexual attraction and a magnetic connection between two individuals.

Both feel a subconscious desire for each other. Their intense feelings and craving for physical closeness make them discover other facets of their characters. They feel comfortable when together.

With their refined intuition, they are capable of assessing what others think about them. But this level of intuition is both a blessing and a curse because it often puts them in constant conflict.

Having Moon Conjunct Pluto in your birth chart empowers you to generate significant wealth for spending and allows you to enjoy a luxurious dream life.

This planetary combination with their conjunct represents a Plutonian relationship that is equally intense and confusing at the same time.

However, Moon and Pluto are quite the opposite in nature, but their relationship is not at all superficial.

They have a deep and passionate bond with a streak of dominating and possessing each other. Their intense emotions and strong sexual chemistry make them perfect for each other who cannot escape each other at any cost. Thinking of living without your partner seems impossible for individuals with Moon Conjunct Pluto in their birth chart.

The conjunction is the strongest aspect in synastry that merges the energies of two planets into one. It displays a passionate love bond containing emotional pain and an overwhelming obsession with partners.

When your Moon conjuncts with your partner’s Pluto, it generates a compelling sexual and emotional attraction that is impossible to neglect.

Your partner connects with you at a subconscious level to bring the most out of you. Being Moon, you feel exposed in front of Pluto’s deep probing eyes.

You tend to please your partner in the most unusual ways to keep the spark of your relationship lit. Pluto’s dominating nature sometimes might make you feel controlled. But your affection and pure love towards each other overcomes the jealousy and possessiveness, and both of you enjoy the intense touch and closeness more than anything else.

The power struggles and manipulative traits are just superficial and temporary in your association. Pluto’s mind games often lead to heated arguments because Pluto’s desire to control Moon gives him satisfaction. Although your relationship is a bit complex, overall, you love to be with each other and dwell your carnal desires together.

Moon Conjunct Pluto is a relationship based upon the intensity of emotions.

It is a rollercoaster of habits, subconscious patterns, and instincts. Its base is not rationality rather extreme sentiments.

Moon conjunct Pluto individuals are masters of hiding their feelings. But inwardly, they are in a constant battle with themselves. Pluto’s wish to dig deep into things to know the truth amplifies the intensity of his relationships.

Moon feels naturally drawn to Pluto, just like a moth to the flame. Pluto is never easy to handle, but it triggers an extraordinary attraction to make Moon feel incomplete without him.

Moon’s softness, coupled with Pluto’s dominating nature, becomes a reason for obsession in their companionship. 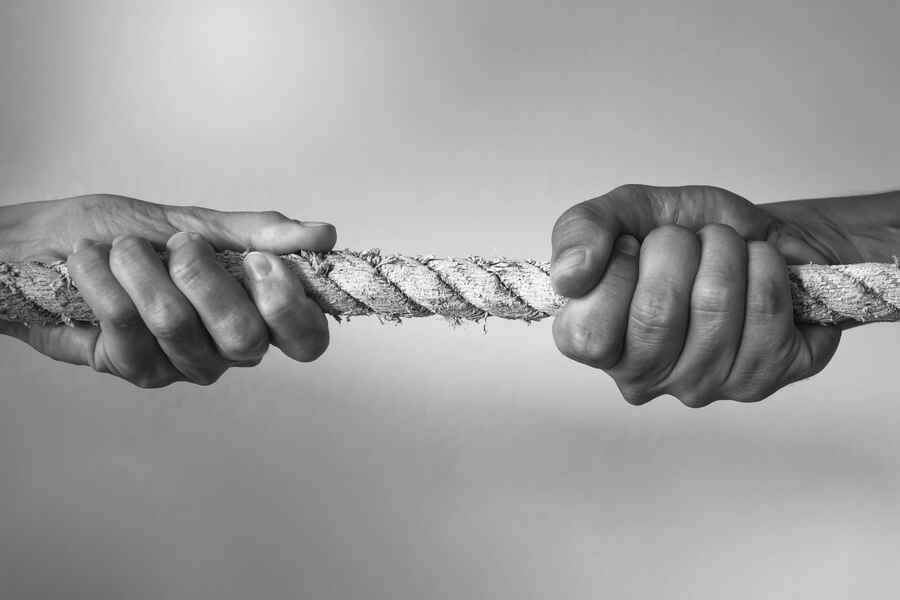 A good relationship is healing and transforming for both partners. But in the case of Moon Conjunct Pluto, the beauty of their relationship might be ruined sometimes because of Moon’s self-destructive attitude and Pluto’s out of control jealousy.

The intensity of Pluto’s emotions often makes Moon feel submissive. Pluto wants to control Moon completely. He always wants to have the upper hand in their bond. Even in bed, he wants to dictate her moves. Such domination offends Moon, and she feels like a pawn in Pluto’s hands.

On the other hand, Pluto also feels offended because of Moon’s extra affection and care. Sometimes he wants to be alone and craves some space. But both cannot live without each other, and this also makes Pluto use some dirty tactics to hold Moon back in his life.

Transformation is a mandatory part of life. If you accept change without resisting much, it makes life easy and peaceful. When Moon and Pluto come across each other at degrees in a birth chart, it indicates a complete transformation and deep cleansing.

In Moon Conjunct Pluto Synastry, there is no scope for fake personalities. Both planets, especially when meeting in conjunction, probe to explore the reality of each other. They face each other inside out to connect at deeper psychological levels.

Both Moon and Pluto are often found advising on positivity and conflict resolution to others. But in reality, they often fail to practice this in their personal lives. Moon’s insecurity about her emotions and holding her partner only to herself taint the happiness of their companionship.

Pluto does not like to give reason to anyone about his behaviour, even to his partner in love. This attitude surrounds them with negativity. Owing to their insecurity and negativity, both fail to figure out the solution to their problems. This way, their profound love and attraction towards each other fall prey to resentment.

A maternal figure or a close friend plays a vital role in Moon Conjunct Pluto’s life to resolve their issues.

Moon Conjunct Pluto individuals are super emotional and cannot be imagined to live a peaceful life. Their lives are a combination of emotional drama and love-hate relationships.

They are obsessive about their families and relationships. The fear of loss leads them to use mind games and manipulative tactics to control their partner.

If you are a Moon Conjunct Pluto person, you know your inner conflicts well. Utilize your intuition to keep yourself on track. Use your psychological insights to manifest harmony in your relationship.