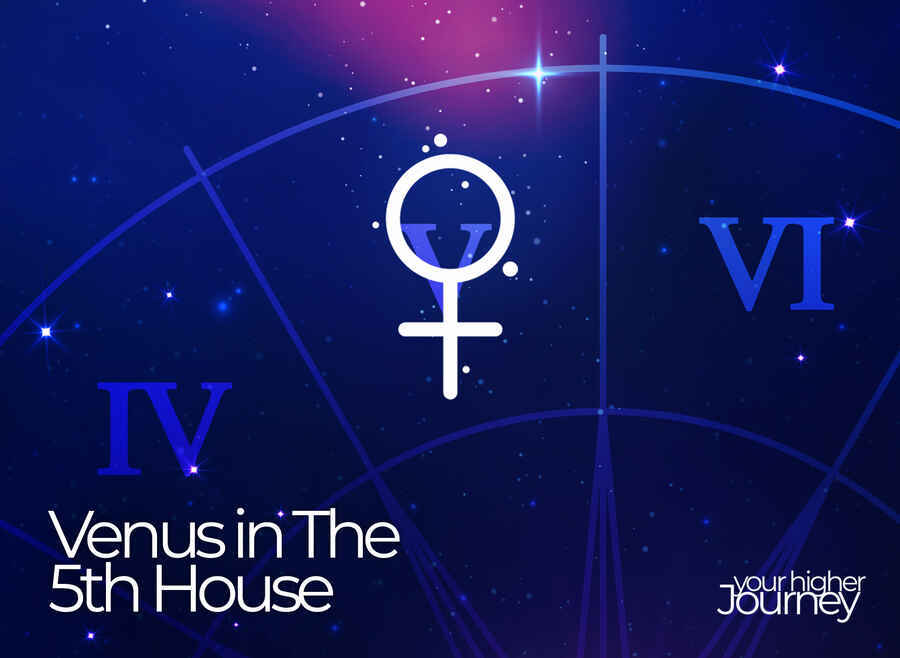 Synastry is an important and interesting concept in astrology.

It studies the compatibility of two individuals based on their natal horoscopes. It helps them understand how their relationship with each other is likely to be, what challenges they may face, and how they can overcome them.

This is why it is also called the art of relationship astrology.

Synastry is a sophisticated system and a lot of effort goes into calculating two people’s compatibility. It involves making a map of the planets, their angles in the solar system, their positions in the zodiac of a person, and so on.

Out of the many planets that are looked at, Venus is among the top ones. This is because this planet represents love, romance, and pleasure (that’s why it is called the Goddess of love in mythology).

While comparing the natal charts of two people, the Venus of a person can fall in any of the houses of the other person. Below, we discuss the compatibility aspects of Venus in the 5th house synastry.

This is one of the best placements that you can expect if you are in love with someone or want to date or marry them. Many people call it the “fairy-tale” placement because it allows for unending and unconditional love between two people.

If your Venus is in your partner’s 5th house, you will be highly enamoured by them. There will be an effortless romance between the two of you and your relationship will seem like it was always meant to be.

One of the reasons for this is, your love for them will be so strong that you will tend to overlook their flaws. You will be aware of them but you won’t be bothered by them and forgiveness will come naturally for that person.

Another reason why this placement is considered auspicious is that it creates a natural spark between two people.

As such, both of you will feel an unexplainable attraction towards each other. Your partner, especially, will have a strong desire to procreate with you. Obviously, this leads to a great deal of sexual satisfaction as well, which is something that strengthens the bond between two people further.

There might be a bit of possessiveness involved from your side but your partner will only take it as a sign of love.

In fact, they will love the fact that you just can’t share them with anyone else. They enjoy being the centre of your attention and this brings you two closer than ever.

Also, they reciprocate all of your feelings and emotions towards them which creates the highest level of sweetness imaginable in a relationship.

So, if your venus is in your partner’s 5th house, thank your lucky star that you found them in the first place. Most people would do anything to have such a relationship and chemistry. Now, since you have got it, the onus is on you to nurture it and help it grow.