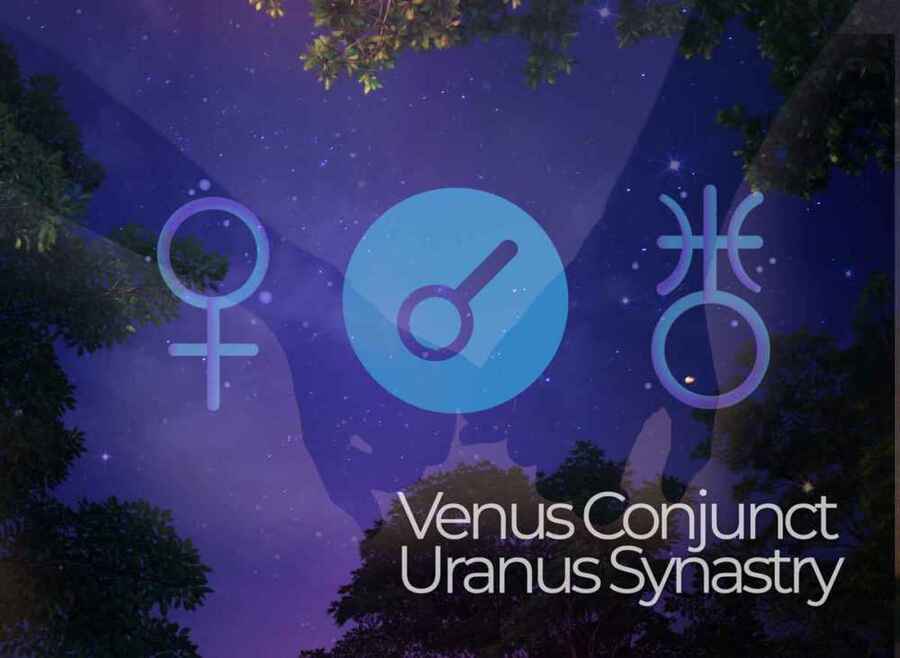 Have you ever felt the heart-stopping moment of falling in love at first sight?

To answer such questions, he has always taken astrology to interpret how planets influence individuals’ personalities and relationships.

Venus is well-known for its romantic and harmonizing traits, and Uranus always seeks independence and adventurous thrill in everything. When your Venus conjuncts with your partner’s Uranus in synastry, it indicates an eclectic, torrid, and magnetic love affair.

Such a relationship can expect unstable and unexpected situations in its course.

Keep reading to get all your answers about this quirky, quick, unexplained, unconventional contact of Venus and Uranus.

Venus, the most beautiful goddess of all, symbolizes fertility, pleasure, and love. Owing to its enticing, seductive powers, people born under this planet’s influence ensure their relationship is harmonized and their partner is happy. They are romantic and fun-loving individuals.

Venus’ aesthetic sense makes its natives desirable and attractive. Venus elevates the sexual pleasures and compatibility in synastry and represents the carnal desires and sensual side of a love relationship.

Venus is the planet of refined and gentler passions.

This planet is known for its eccentric and highly individualistic approach towards everything in life. Because of its rebellious nature, it does not approve commitments.

Uranus people represent the finest blend of innovation, revolutionary ideas, and socially neutral persona in their synastry. These lunatic geniuses are one of their kind.

Their originality and rebellious nature make it difficult for them to commit to a long term relationship. Still, Uranus cannot be said to destabilize any relationship. 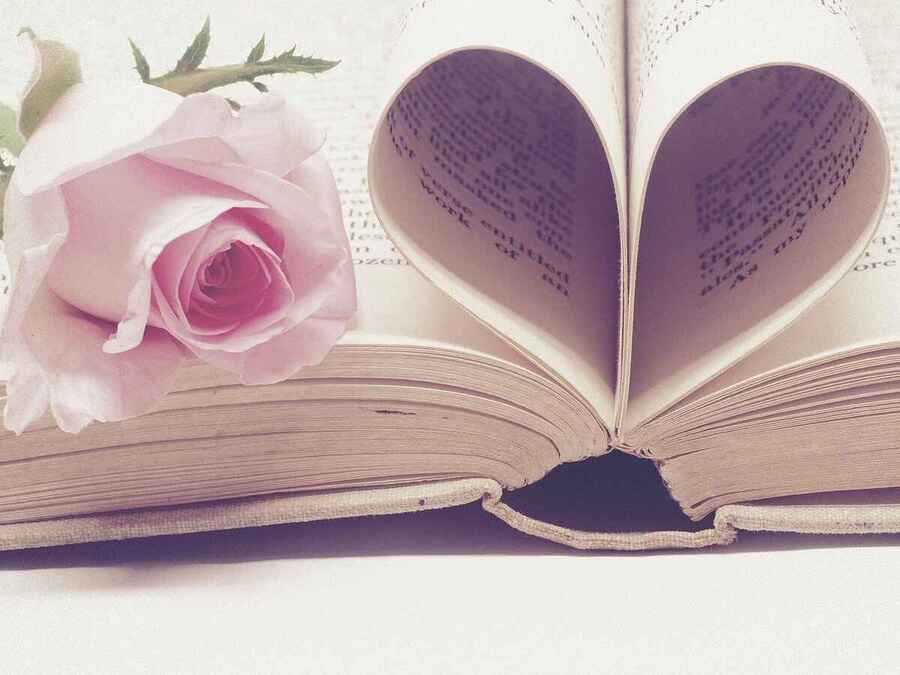 Venus conjunct Uranus in relationship synastry implies an unpredictable, exciting, and heart-throbbing romantic relationship marked with creative and unconventional support for each other.

The pairing of Venus’ passion and Uranus’ uniqueness gives birth to a sparkling relationship that will be remembered for years. Although their relationship might not be long-lasting, yet it is artistically intriguing and inspiring.

Uranus’ visionary approach satisfies Venus’ aesthetic sense and urges you and your partner to experiment with new things and travel on unexplored paths. As a couple, you enjoy your social life.

Venus yearns for a lifelong commitment, but Uranus runs away from this conventional attitude. That’s the reason for the inconsistency and instability in their union.

These creative romantics are like a moth to fire and enjoy their beautiful life together. Despite all the differences in their approach, their relationship is a hallmark of beauty, passion, and thrill.

Their opposite ideas make them experience an electrifying life period and fuse inspiring energy in them.

Venus and Uranus’ sudden meeting sparks undeniable chemistry. Venus individuals charm Uranus with their graceful personality and poise, making them feel like they have met their soul mate. The strong pull of connecting at a physical and spiritual level initiates their relationship with a bang.

They feel comfortable and confident with each other to share their thoughts and secrets without any hesitation. The electric sexual attraction makes this couple enjoy sex beyond limits.

Both share their fantasies and pay special focus to satisfy each other in bed. They believe in extracting happiness from every moment. Both value their relationship and live it to the fullest.

Venus wants balance and stability in romance, whereas the revolutionary Uranus seeks excitement. Uranus people only run away from Venus when they fail to tolerate their demands of commitment.

Uranus tries to convince Venus to get rid of old conventional ways of life and inspire generosity beyond ego to feature a dream life as a couple for them with their unique perspective and higher mind.

Their charismatic chemistry makes them see the world from a new perspective and gives them the courage to face everything together. Venus’ healing effect makes Uranus people feel appreciated and understood. 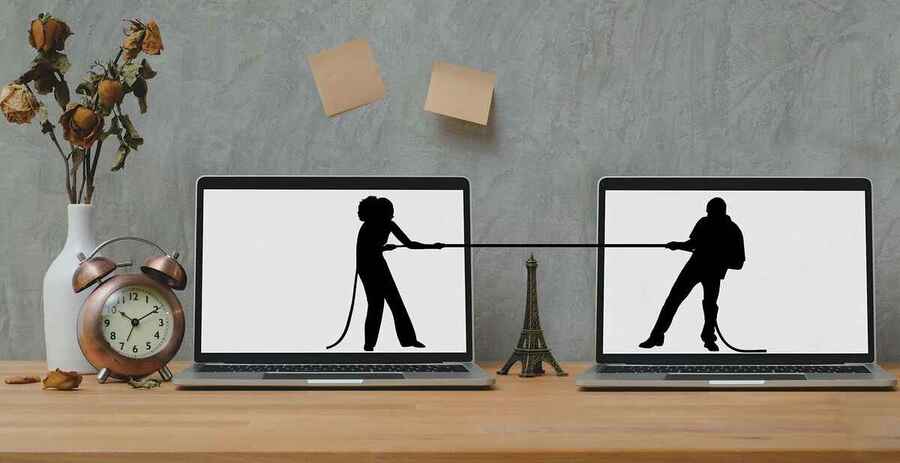 Venus-Uranus companionship is known for its off-on energy, many separations, and commitment frustrations to tarnish their pleasure. Venus soon starts feeling frustrated because of Uranus’ constant neglect of taking responsibility in their relationship.

Both accept each other’s personality and lifestyle, choices, and preferences yet feel discontented at moments because of their inability to harmonize their relationship.

Uranus feels chained and irritated with demands of commitment and decides to separate their paths, eventually. Their relationship can unexpectedly meet its end as it started because of Venus’ disappointments and Uranus’ lack of interest.

Temperament clashes ruin their relationship and result in changing their priorities, influences, and tastes in particular. This power couple in synastry perfectly fits the myth of opposites attract.

This conjunction in synastry charts reveals the capacity of long-distance, wide age gap, and interracial relationships.

This eccentric couple meets lots of ups and downs in their way. Their relationship is an emotional rollercoaster for both partners, and they should be ready to face the unexpected.

They have to deal with highs and lows if they want their bond to work. Venus’ craving for a commitment from Uranus creates rifts and tensions in their companionship.

Their association in such circumstances makes Uranus run away from the scene or even break ties for good. They can expect separation at any moment, even in the most intimate days.

The erratic quality of Venus conjunct Uranus in synastry also symbolizes emotional distancing at critical moments. Although they feel immediately attracted to each other, the hard edge characteristics of both sometimes create needless disruptions that hamper their associations beauty.

Both need to see the bigger picture to understand their differences and avoid unrest in life. Love is a hard rock for this couple. The unusual attraction instils a creative expression in their life only if they can deal with their inability to count on each other and forcing their values and choices on each other.

By utilizing the right amount of energy to stabilize their relationship, Venus and Uranus individuals can live together for a longer period to enjoy the intensity and warmth of unconventional love.

The electric attraction between them becomes frightening too, but overall it is inspiring and uplifting.

The conjunction of two planets in a synastry chart blends two individuals to form a new and appealing association. It establishes a vivid relationship.

Uranus is a planet of innovative ideas when it meets with Venus, the planet of beauty and love. Their pairing results in opening new doors of opportunities and possibilities to initiate a relationship where conventional rules do not matter.

Both Venus and Uranus individuals step out of their comfort zone to craft their story of dating, love, and sexual pleasures by themselves. They feel a renewed energy in their spirit to dream about pure and straightforward life.

This is an aspect for those who want to grow together with a unique acceptance of each other.