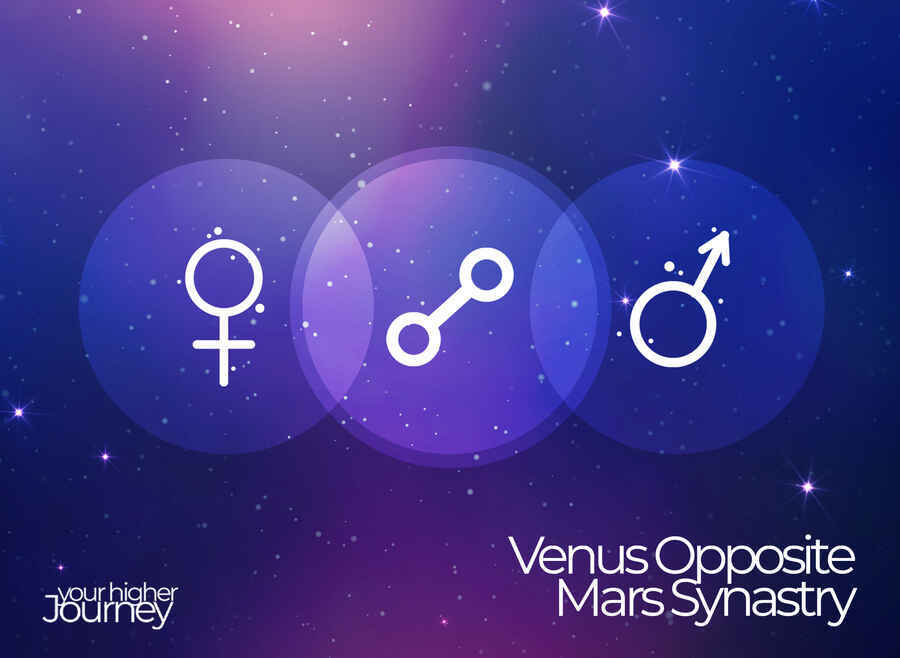 Venus and Mars are the two most important planets in relationships, making this a complicated aspect.

The Myth of Venus and Mars states that Venus’ incredible looks and charms brought Mars to her, and Venus’ love finally tamed Mar’s bold and wild ways. Venus was the only one who could soften the rage and impulsive ways of Mars.

Venus-Mars combinations create attraction and chemistry, but also produce conflicts that can feel impossible to sort through. Yes, this synastry is complicated indeed.

A romantic Venus Opposite Mars Synastry has a profound physical attraction based on their initial biological interest and connection at the start of their relationship. This couple will feel an immediate pull to one another and an intense sense of attraction, even if one or both of them just ended a long-term relationship.

Make no mistake though, this is not a shallow relationship and can last a lifetime if the couple is willing to listen and make sacrifices for one another. 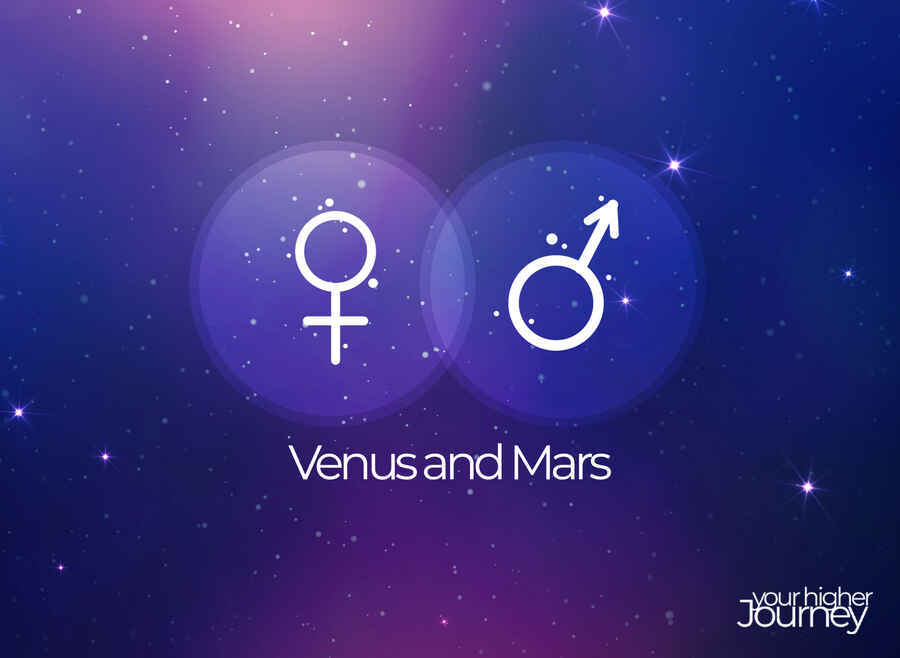 Oppositions are not necessarily wrong or ‘bad’; in fact, they can be a source of opportunity and growth.

Venus is the emotional, giving, and peaceful partner whereas Mars is physical, receiving, and impulsive. Venus is submissive; Mars is dominant.

Couples with a Venus Opposite Mars Synastry have a strong yet rollercoaster relationship with a lot of romantic and sexual attraction. Desire is never lacking in this relationship.

While these lovers have a strong bond, they often feel that their relationship is unstable- thus adding to their emotional rollercoaster.

If this relationship hits a rough patch, one or both lovers may feel compelled to become possessive, envious, or competitive with outsiders.

If this opposition becomes too intense and polarizing, even the romantic and sexual aspects of their relationship will eventually become the opposite, pushing the couple to a breaking point and at warp speed.

Even if this couple does separate, they will always spend a lifetime longing for that physical and sexual connection with one another.

Examples Of The Ways That Venus And Mars Clash 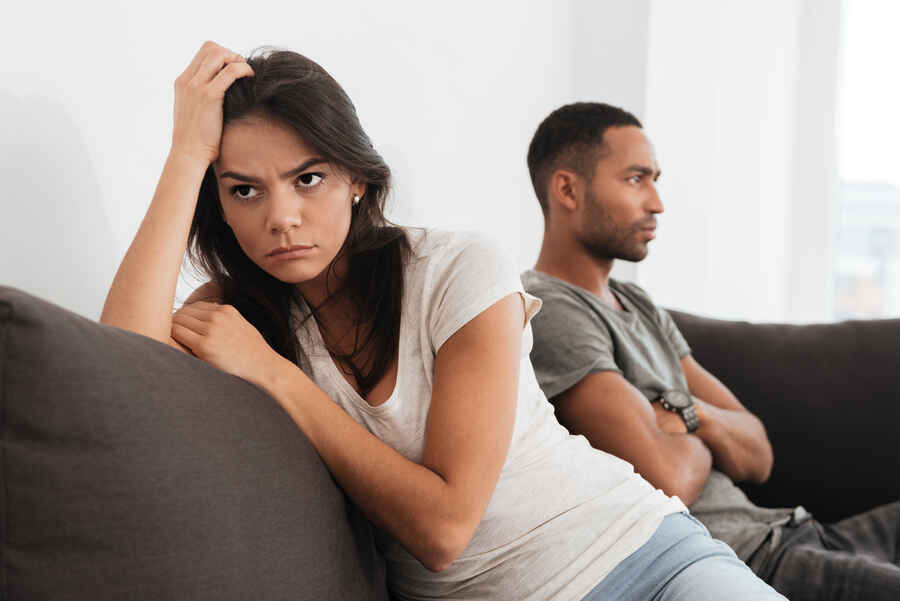 The Venus lover often doesn’t react to Mars’ initiations the way Mars anticipates and hopes for; this is a classic miscommunication issue.

The best way to sum up all of Mars’ and Venus’ relationship issues is this: each lover has a different approach to intimacy, and each lover speaks a foreign language when it comes to love. Communication issues exacerbate this problem.

Possessiveness is an obstacle that both lovers will have to work hard to overcome; however, the needier Venus lover is even more susceptible to developing jealous feelings over their partner.

The Venus lover will often perceive the Mars lover as inconsiderate, too direct, or even aggressive. As a result, Venus may feel that the Mars lover is only interested in them on a sexual level– not romantically. This is not true. However, this is how Venus perceives Mars’ actions and this will cause a strain in their relationship at times.

On the opposite end of the spectrum, the Venus lover may become too sensitive or introverted for the Mars person’s liking. Mars may also perceive Venus to be seductive, but lacking any actual substance. Venus craves a subtle and quiet finesse-style way of communication, while Mars desires a direct, blunt, and sometimes loud form of communication.

Mars loves to pursue their partner, and Venus’ submissive, responsive, and pleasing ways can hinder Mars’ desired relationship dynamic. Again, this is a communication issue. Mars and Venus have to discuss their needs and take turns making small sacrifices for one another. They

While both people feel overwhelming sexual energy, they may feel it’s difficult to draw up this energy and attraction and use it to its full potential. This is frustrating for both lovers, usually impacting the Mars individual more, and can be devastating for the couple if they don’t talk about their thoughts and emotions.

Because of this, the timing between Mars and Venus is frequently off. Each lover has different wants and needs, and communication is difficult for each person. This couple may not even realize how much they desire the other until their relationship is put in jeopardy or even ends.

This couple is definitely susceptible to breaking up and getting back together over and over.

Ways That Mars And Venus Help Each Other Grow 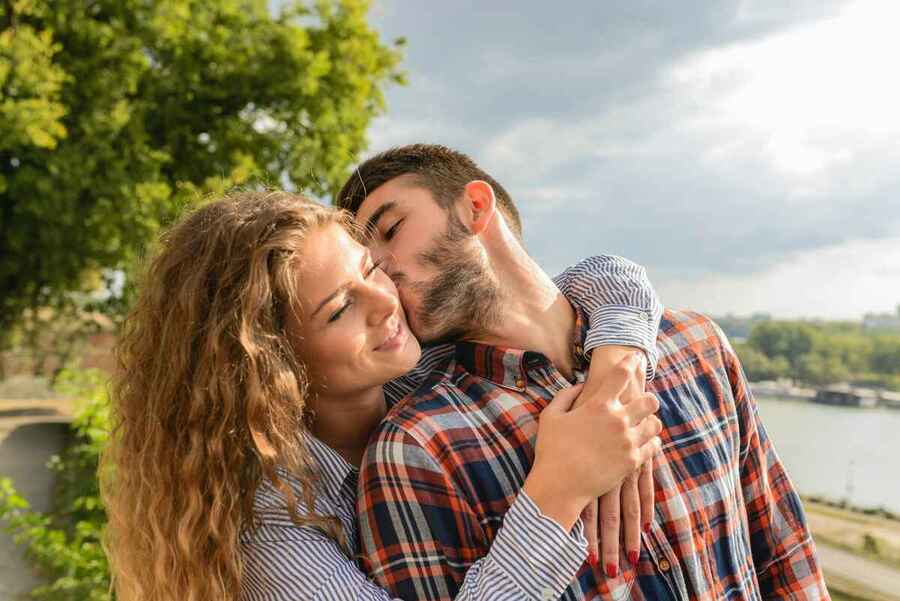 Mars is a masculine force, while Venus is a feminine one. Their opposites can combine to create a delicious mixture. These two lovers have the opportunity to help themselves, and each other grow exponentially.

Mars’ courage and ambition are seen as adventurous and appealing to Venus. And Venus’ gentleness, seductive ways, and sense of peace can feel like a safe harbor in a stormy sea to Mars.

Mars will pull Venus out of their shell, encourage them to pursue their dreams, become more spontaneous, and leave their comfort zone. Mars will also prevent Venus from falling into a stagnant, boring routine. Venus is also prone to self-indulgence, which Mars balances out.

Venus’ inherent character flaw is that they can quickly become too confident, lack focus, lack motivation, and procrastinate instead of focusing on their needs and goals. Mars has an overwhelming amount of motivation and voices its opinions freely, which is enormously beneficial to helping their partner Venus stay on track.

Mars can be too focused, on the other hand, and Venus excels at liberating Mars from their serious endeavours. Venus is also a soft, gentle soul for Mars to lean on.

Venus also helps Mars balance their life between work and play. Venus will sand down Mars’ dangerously sharp edges and bring a sense of harmony to Mars that Mars had otherwise never experienced. Venus will also help Mars rekindle old relationships that Mars’ intense and fiery behaviour may have pushed away in the past.

How Venus And Mars Can Make Their Relationship Work

There are many redeeming qualities about a Venus Opposite Mars Synastry, and that is how the couple mirrors one another. Each person represents something profound to their partner, and this is because their approaches to intimacy are almost entirely opposite.

Each person will have to recognize, confront, and find healthy ways to deal with the insecurities that lead to their jealousy.

If the couple can recognize this mirroring, they will bond more vigorously than ever and finally explain their desires to the other effectively. This change will bring about compromise and another level of love, romance, and sex for their relationship.

Compromise for this couple will require them to release preconceived notions and sometimes let go of stereotypical gender roles. They must shut out what the outside world wants and focus inward on what is best for their relationship.

Communication and compromise are indeed the keys to this complicated relationship’s success. Self-awareness is also a crucial aspect.

The woman is more likely to take the initiative, and the man is expected to appreciate this. However, this relationship can also result in conflicts between the two lovers because he finds her strength attractive. Still, at the same time, he has trouble relaxing and accepting these feelings.

From the outside, the conflict may be created by gender roles; it is not. He is receptive, and she is active.

When the couple can relax and accept this balance, they find harmony and can grow together. When one of them resists it, the relationship can feel uncomfortable.

This scenario is the opposite of the Man’s Venus opposite Woman’s Mars relationship, except with the gender roles reversed.

The woman finds her man’s initiative attractive, but she is likely to feel uncomfortable letting him take the lead. This combination will exaggerate stereotypical gender differences, so unlike the previous couple, they can take solace and find understanding through outside support.

This dynamic can be uncomfortable for the couple at times, but it allows them to grow and learn together.

Venus Opposite Mars In Friendships 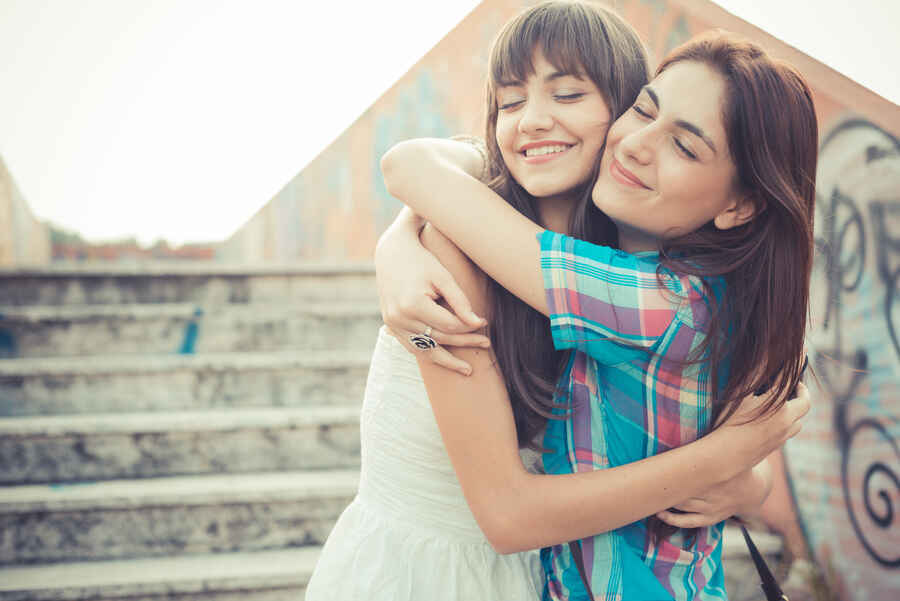 Friendships that have a Venus-Mars combination are potent and firmly bonded.

Each person will trust the other, and these two can freely share their opinions and advice without deteriorating the friendship.

For example, the Venus friend is a calming agent for their Mars friend. The friend whose Venus is involved can stop their friend’s rage-powered or impulsive temptations.

Meanwhile, the Mars friend is an eye of clarity for their Venus friend. This person is beneficial in helping the Venus person better understand their romantic relationships.

Their opposite strengths and weaknesses nicely complement one another and make each friend a better person.

Venus opposite Mars presents a new layer of complexity in friendships and romantic relationships.

In romantic relationships, it is uncomfortable but an excellent opportunity for the two lovers to mature and grow together. Venus opposite Mars also guarantees a long-lasting, powerful sexual and romantic connection that will last a lifetime, even if the relationship itself doesn’t survive that long.

In Platonic friendships, Venus opposite Mars strengthens bonds and allows the two friends to assist each other in their perspectives and find the truth.